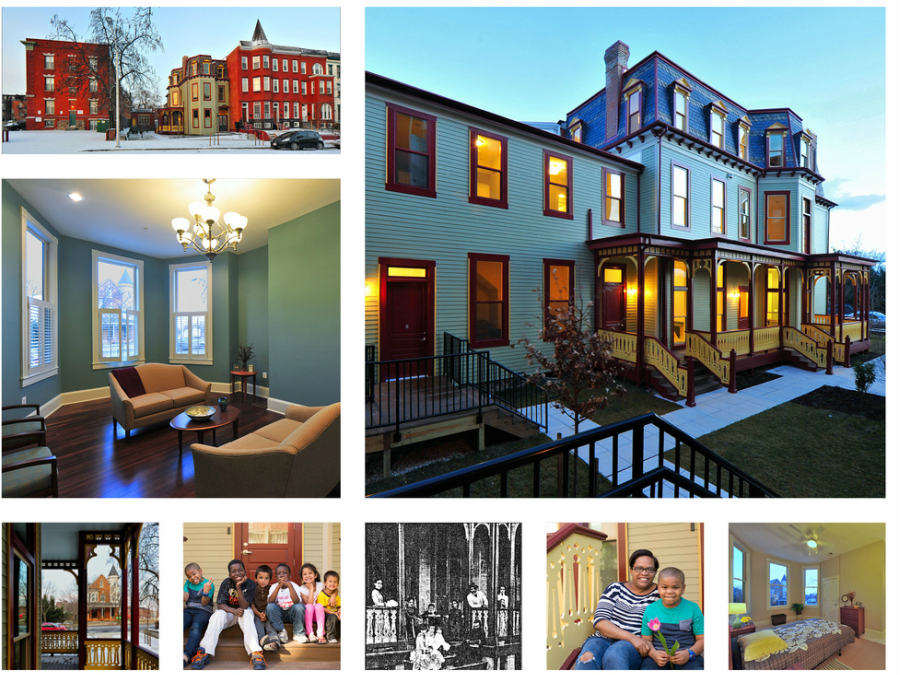 The historic Linden House was built in 1886 and was the home of David Bachrach and his family for many years.  Mr. Bachrach was a prominent commercial and portrait photographer who built the house nearly two decades after he photographed Abraham Lincoln at Gettysburg at the time of his Gettysburg Address. His brother-in-law, Ephraim Keyser, who headed the Maryland Institute College of Art’s Rinehart School of Sculpture, had his sculptor’s studio at the rear of the property, where it remains and has also been handsomely renovated. The Women’s Housing Coalition has renovated the main house and a detached former studio into five affordable apartments.

We, at Women’s Housing Coalition, partnered with Episcopal Housing Corporation to renovate this Reservoir Hill landmark, listed on the National Register of Historic Places. The Linden House allows Women’s Housing Coalition to provide housing and work with five women and children who were homeless who want to take control of their lives and need help to lead stable lives for the rest of their lives. The home has been reconfigured, with four affordable apartments in the main residence and another in the Keyser sculpture studio.

The house was designed by the prolific Baltimore architect George Frederick, who gave us our City Hall and many other landmarks, including St. James the Less Roman Catholic Church in East Baltimore. A large handsome late 1880’s wooden structure, this house is 6,200 square feet, including the backyard art studio. Its sheer size, nearly twice the size of other Baltimore homes in the area, contributed to its list of vexing rehab issues. Normally we build in brick, but the house was built of wood covered with wood siding. After years of sitting abandoned, the wood rot was considerable. “It was in horrible, horrible condition. Nobody knew what to do with it,” said Mark Sissman, director of Healthy Neighborhoods. “There were enough pieces of the original staircase left to duplicate it,” said Daniel McCarthy, executive director of Episcopal Housing, who was a consultant for the restoration. Bits of the interior wood finish survived — in pieces. All were painstakingly copied and reinstated in this thoughtful and well-funded restoration. The Linden House can now serve as a model for restoration, neighborhood stabilization, and effective supportive housing.  The renovation was funded by Healthy Neighborhoods, Inc., with the Neighborhood Stabilization Program, two funds under the federal American Reinvestment and Recovery Act, and the France-Merrick Foundation. Through this support and the guidance of Baltimore City’s Commission for Historical & Architectural Preservation, this long-neglected historic home was preserved, such that it awarded the 2014 Baltimore Heritage Renovation and Restoration Award.