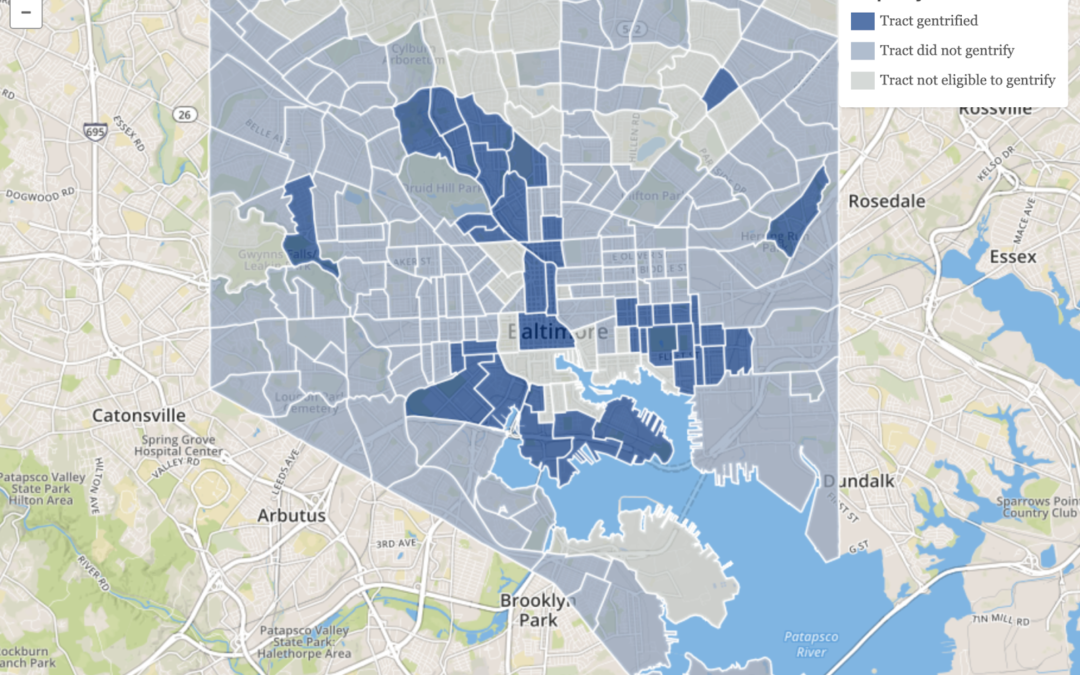 According to a new study by the National Community Reinvestment Coalition (NCRC), a Washington based non-profit, Baltimore is among seven U.S. cities that accounted for nearly half the country’s gentrification between 2000 and 2013. NCRC examined census data for 935 metropolitan areas in the U.S. and discovered gentrification was most intense in large coastal cities, concentrated in larger cities with vibrant economies. The researchers also looked at any corresponding displacement of black and Hispanic residents. Census tracts in Baltimore, New York, Los Angeles, Washington, D.C., Philadelphia, San Diego and Chicago accounted for nearly half the country’s gentrification from 2000 to 2013, according to the report. Of the 1,049 census tracts across the country that experienced gentrification during that time period, 501 fell in those cities, according to an article in The Baltimore Sun.

What is gentrification and what does it mean for Baltimore?

Gentrification is the process of renovating and improving a house or district so that it conforms to middle-class taste. Gentrification can improve the material quality of a neighborhood, while also potentially forcing relocation of current, established residents and businesses seeking lower cost housing and stores. According to the Centers for Disease Control and Prevention’s (CDC) Health Effects of Gentrification Journal, gentrification often shifts a neighborhood’s racial/ethnic composition and average household income by developing new, more expensive housing, businesses and improved resources.

In Baltimore, leaders have caused gentrification to get worse by “acting to attract wealthy residents to neighborhoods rather than making areas better for residents who live there,” according to Carol Ott, tenant advocacy director for the Fair Housing Action Center of Maryland. The city had the fifth-highest number of gentrified census tracts, and the sixth-highest percentage of gentrified tracts: 171 of the city’s 679 census tracts were considered eligible for gentrification, and 22 percent of those neighborhoods experienced gentrification.

This data means that fewer and fewer affordable housing opportunities will be available in the communities that need it the most. In a city where nearly 1/2 of residents live below 200% of the federal poverty line, leaders should focus on improving a neighborhood without displacing people. Ott states that instead of focusing on “the people who live here now and not the people who you want to live here in 10 years,” that the city could “work to build more community centers and encourage the construction of affordable housing — for people who earn the city’s median income or under.”

We here at WHC, feel that affordable housing opportunities throughout Baltimore are needed in order to fight the homelessness epidemic. Currently we are completing our strategic plan, which addresses how we can support this need and serve more people. One of the ways to address the need is to increase the number of affordable housing options in the communities that need it the most. Stay tuned for more details later in the year.